Tony Nicolosi is a consummate guitarist and an exciting ssinger. Tony started his career at the tender age of six years old. “I heard my first recording of Tony Mottola and the incomparable Mr. Sinatra and I was hooked” says Nicolosi. “When I perform I don't make a concious effort to sound like the original artist, but for some strange reason it just comes out that way. I have been compared to Sinatra, Bennett, Clapton, Benson, and even Barry White. Go figure.” Tony, a native of Queens, New York, had his first quintet at 16 years old. After a stint in the military, he reformed his quintet into a Las Vegas style show group playing and opening for such notables as George Benson, Barry Manilow, Glen Campbell, and Dinana Ross, just to name a few. Tony and his group then heade to the Las Vegas circuit. “The Stardust and the Sahara Hotels were pretty much home for me and my group for years.” Nicolosi now makes his home in South Florida. He has performed with his 10 piece band at major hotels and country clubs such as the Fountainbleau in Miami Beach, The Boca Raton Hotel, The Polo Club, The Breakers Resort, and the Ritz Carlton in Palm Beach.

Mr. Nicolosi considered himself very fortunate to have performed at these most notable venues in a corporate and social setting. “Where else could a boy from Quenns, New York, grow up and perform for VIP's like Gerald Ford and Wayne Huizenga? It's unbelievable.” He also performed for the cruise ship circuit aboard the Royal Caribbean Cruise Lines and the Celebrity Cruise Line. “I love meeting people from all walks of life. We may be of different backgrounds but the one thing that we share is a mutual love and respect for great music and entertainment.” 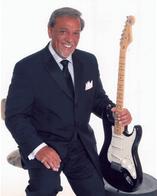