Donna Shelley, born in Brooklyn,NY began her career in Murray the K'scomeback revue in New York City at barely 18 years old. Choreographed by Henry Le Tang, Donna & her partner Jeff went on to perform a successful club act that led to 2 yrs on the syndicated TV show "Soap Factory". They were a featured act on many of the top cruise lines and in commercials several films including "Let It Be Me". They joined the American Ballroom Theatre for 6 yrs where they performed in major theatres around the world including Kennedy Center, the Jackie Gleason Theatre, the Joyce Theatre and the Kravis Center. Donna has also been featured in films & television commercials working with greats like Patrick Stewart, Jerry Orbach & Leslie Caron! Donna recently moved to Florida where she choreographs & performs in her own show The Rhythm Chicks for the last 8 years!

Erica Toledo hails from Tampa, FL and began singing & dancing at the age of 5. She was a student of Rene Godin & performed with Scott Evans productions and the Forida Allstate Choir. Erica was also honored to sing at Carnegie Hall in a tribute performance for 9/11. Her theatre credits include "Mary" in Give My Regards To Broadway and "Miss Adelaide" in Guys & Dolls. She is happy & proud to be part of a fun "Girl Power" show like the Rhythm Chicks. She is also an accomplished ballroom dancer & won many competitions!

Yamila Ayala (Yami Ayala) is a Miami born, professional musician/ educator who's short term-goals are to gain more experience as well as exposure through a variety of Music, Music Education, and Performances with others as well as her own. Yamila is proficient in playing/teaching Contemporary Voice, Piano, Clarinet, Flute, Saxophone, and Music Theory for anyone, any age. Yamila also has experience in Broadway, and Musical theater. Yamila performs regularly with "The Rhythm Chicks". Which incorporates not only popular music, but many Broadway numbers.  Yami now attends Miami Dade College Kendall Campus for her Associates degree in Jazz Vocal Performance while also studying Jazz Piano. With everything Yamila has done so far, she has worked with the likes of Steve Kirkland, Brenda Alford, Ed Calle, Cheryl Bentyne, and The Negroni's Trio, and The Rhythm Chicks. Her dream is to inspire and educate others about her undying love for music. 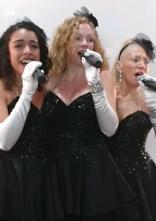