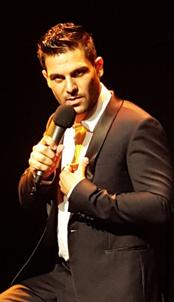 Michael Peer is a trained Pop-Opera Singer with a five-octave range, from bass-baritone to countertenor. By combining electronic elements with classical music, Michael aims to bridge the gap between younger and older crowds and introduce more people to the world of opera.

In the summer of 2010 Michael performed at the Israeli Opera. Michael sang his debut recital at Carnegie Hall in November 2010 with string quartet Attacca from the Juilliard school. In January 2011, Michael started his tour in Europe.

In addition to performing, Michael taught Voice and Theory at Queens Borough Community College in Bayside, New York. He also taught a voice education class “The Joy of Singing” as well as provided master classes around the world. Currently, Michael resides in Florida and teaches music in public schools and private voice lessons in his studio.

Currently Michael is working on his album in a crossover style, composing his own songs. In 2017, Michael released the digital EP “Fortuna” to Spotify, Soundcloud, iTunes, and other major music streaming platforms, worldwide. This EP demonstrated Michael’s versatility, from EDM to classical music genres.

His latest track, “Fallin’ Love” was composed by Noam Alusim and became a major success in Brazil, Germany, and The Netherlands.