Kendra Erika, a South Florida-based rising star with multiple top ten hits on the Billboard Dance music charts, is like a timeless, flaming-haired siren whose voice is her superpower. For Kendra, achieving musical success has been no small feat. Tone deaf as a child, Kendra was determined to do the work necessary to overcome this setback. She spent years in classical training just to learn how to sing on key. When she was 13 and 14, Kendra won the Boca Raton Future Stars competition two years in a row, singing opera with Time to Say Goodbye (Bocelli) and Wishing You Were Somehow Here Again (Phantom of the Opera). She had numerous operatic parts in middle school and high school ina local community theater including Phantom of the Opera, Hansel & Gretel, and Sound of Music.

Today, her songs are streamed across the globe on Amazon, Spotify, and Apple with hits like “Self Control” that made its way to #1 on the Billboard Dance Chart. With an emotional delivery of ballads like Avalanche and Song of Hope, her voice can pull your heartstrings, and she can belt out operas with a tonal perfection and vocal beauty that will bring you chills. Her musical vision is driven by her fight to evoke emotions with her fans, to feel alive and invigorated. She is more than just another great singer. Although she’s smart, witty and independent, her mother would not support Kendra in a full-time singing career until after she finished college. At first this felt like another setback to Kendra, but today she has a degree in communications and international business, and she’s grateful. Her education bolstered by strong family support has given her the grounding she needed to navigate the entertainment world safely, and now she’s in a better position to use her career to support the causes she believes in.

Kendra Erika is a spicy, bold, artist with a touch of vintage Hollywood complemented by the desire to help others, which includes a partnership with War Child for her single Song of Hope. It’s fitting that Hollywood Life Magazine dubbed her “the queen of hearts,” and that she has attracted musical collaborations with the creme de la crème in the industry. She has worked with a bevy of Grammy winning producers such as Charlie Midnight (Billy Joel, James Brown, Joni Mitchell); Jan Fairchild (Elton John, Mary J Blige); John DeNicola (Hungry Eyes and Time of my Life from Dirty Dancing); Damon Sharpe (Ariana Grande, Jennifer Lopez); Ned Cameron (Kid Ink, Lil Wayne); Mark Mangold (Cher, Michael Bolton); Luigie “LUGO” Gonzalez (Janet Jackson, Madonna, Barbra Streisand). Kendra has performed in major music clubs around the world and has opened for international pop artists, including Jason Derulo. 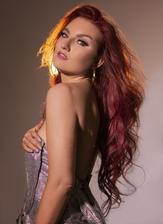