With over 30 years experience in the entertainment industry, Jimmy Chapel is the classic Singer-entertainer and comedic storyteller. As soon as the spotlights hit the stage, Jimmy Chapel will get you in the groove for a fabulous night of entertainment. A good time will be had by all!

This versatile, World Class Entertainer combines a smooth, powerful voice with an ability to capture all styles of music and a flair for comedy that has his audiences laughing and participating as Jimmy Chapel wins their hearts with every performance. Jimmy Chapel has performed throughout the United States and Europe in his “One Man Show” and has shared the stage in the lounges and main rooms in Las Vegas and Atlantic City with Don Rickles, Jay Leno, Joan Rivers, Rita Moreno, and many others. Jimmy Chapel is a First Class Act with consistent standing ovations!

Jimmy Chapel majored in voice at the Cleveland Institute of Music. He won a scholarship and studied acting with Stella Adler in New York City and has a degree in broadcasting form the Don Martin School of Radio and Television Arts & Sciences in Hollywood, California. Rarely does a performer come along who possesses the talent, energy and charm of RCA recording artist Jimmy Chapel.

Jimmy Chapel’s raw power and charm immediately resonates with the audience. Jimmy Chapel’s charismatic stage presence stretches well beyond his vocal abilities, as he shares hilarious jokes, especially about his Italian upbringing “Mama Rosa” his Mother, and “Giuseppe” his Father. Like famous singer/entertainers before him, once you hear Jimmy, you will come to believe that with his personality, talent and showmanship, he will prove to be an unforgettable performer.

A smooth powerful voice, gives Jimmy an ability to capture the singing styles of Frank Sinatra, Tom Jones, Neil Diamond, Tony Bennett, Michael Buble, and many others, plus a flare for comedy that makes him a great all-around entertainer. Jimmy has cruised the world, performing on over 500 cruises and has recorded four albums on RCA Records.

Seen as Sky Masterson in the Broadway musical "Guys and Dolls" with Ben Vereen, Frank Butler in "Annie Get Your Gun", and Bernardo in "West  Side Story" with Alexandra Hunt from the Metropolitan Opera.

Jimmy Chapel is an amazing communicator, expressing the basic wonderment in each of us by simply reminding people, through song, of “The good old days.” Jimmy Chapel performs with a true sense of joy, and that joy is contagious with every audience he performs before. From the thematic threads of his shows to his ability to make the largest halls intimate, Jimmy Chapel is the very definition of a complete and total entertainer. Whether he performs with a trio or full Symphony orchestra, his musical perfection, smiling voice, phenomenal sense of timing and impeccable phrasing, all combine to prove why he stands with the best. There is only one Jimmy Chapel.

Be the next to experience this "World Class Entertainer" 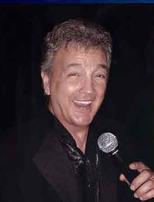