Don has been in show business for over four decades and his show does it all. He is the Entertainer Extraordinaire: Singer - Great Impressionist – Comedian

Don has appeared with many stars, including Johnny Cash, Debbie Reynolds, Hal Lindon, Lainie Kazan, Debbie Boon, and even Liberace. He has performed throughout the United States and headlined some of the finest showrooms in Florida. Don’s many costume changes, complete with hats and wigs add spice to an already delightful show.

He splits his time between Boston, where he grew up, and South Florida. Don has also headlined many of the hotels in the Catskills.

You will laugh till you cry when Richards brings his incomparable style and personality to every performance. Mixing his singing talents with his impressions of Johnny Cash, Liberace, Tiny Tim, Elvis, Jimmy Durante, Jimmy Stewart, John Wayne, Ralph Crandon, and Bobby Vinton, just to name a few, Don astonishes his audiences with comical and engaging shows.

The consummate performer, he is an asset to any venue. 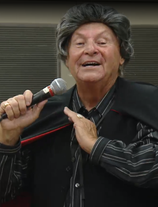