This unique, romantic presentation of the music, the life, and times of American music icon Andy Williams, spans his amazing life from Depression-era Iowa to radio, television, motion pictures, nightclubs, and millions of records sold. The stories and images from his life through the 40s, 50s, 60s, 70s, and beyond, weaved through 18 classic songs including; “Moon River”, “Days of Wine and Roses”, “Charade”, “Hawaiian Wedding Song”, Theme from Love Story”, and many, many more.

Previously residing and working throughout the Midwest, he appeared as the featured vocalist for the Rick Brunetto Big Band for 15 years. During this period, he shared the bill with Deana Martin during several of her National tours.

On the legitimate stage, he starred as MacHeath in Opera Columbus’ production of “Three Penny Opera”. He played leading roles in two Equity productions; “The Glass House” and created the role of President Dwight Eisenhower in the world premiere of “You’re My Boy”.

He has appeared in several feature films; with Joe Pesci in “The Public Eye’ and with Cate Blanchett in “Carol”, among other film roles.

This marks Chuck’s first season performing in the area since locating to Florida’s Space Coast. Over the last several years he has performed in Theaters in St. Augustine, DeBary, and Englewood. Also, he’s enjoyed bringing shows to numerous communities from Venice to Jacksonville! 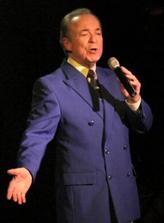