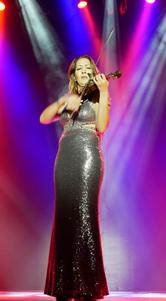 Bernadett comes from Budapest, Hungary and was born into a musician family. Her maternal grandfather was József B. Suha, one of Hungary’s greatest violinists as well as composer. His compositions are played worldwide to this day. She began learning to play the violin at age 6 but only decided to dedicate her life to music following a concert tour in Italy when she was 13. From the age of 18, she continued her studies at the Music Academy in Graz, Austria, and became the student of Professor Silvia Marcovici, an outstanding world-renowned violin soloist. She originally studied classical music but since her dream was to bring joy to all kinds of audiences with her favorite musical genres, she perfected numerous styles of music on her violin in the most varied ways.

– Bernadett has become a global traveller entertaining audiences by performing in many countries since she was 18.
– To listen to her play is to feel her passion.
– From a young age her only wish was to make people happy with her music.
– Her powerful stage presence is underlined by a captivating elegance.
– In 2018 she was listed as one of the most successful people of Hungary.

Bernadett is maybe not what you expect from a violinist… In her own words:

“There are so many different styles of music in the world, as there are so many foreign languages. Regardless of the different styles, music still remains the most beautiful international language. Although I studied classical music for years, but when I realized that I could bring happiness to audiences by playing an evergreen song, film music or a jazz tune, I then decided I would play all types of music so that I can make everyone happy. My show offers an incredible array of musical styles, showing as I mentioned, the endless possibilities playing the violin. It is a true variety selection… classical, folk, film music, musicals, jazz, country… all played in my personal style with my own arrangements. Miles of Styles. I hope that everyone will find their favorite.” Her musical artistry is being compared to that of Vanessa Mae, David Garrett or André Rieu.

Join violin virtuoso Bernadett as she performs a selection of your favorite songs from classical music, movies and Broadway along with her native Hungarian style all performed with a modern twist. A night of music for everyone to enjoy!So laugh, cry and watch in awe as the virtuoso daughter of Hungary puts her bow to the strings.