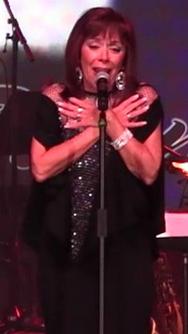 "A Bombshell who sings in Cinemascope. Her voice can rise, soar and quiver with thrilling versatility."
"This girl is going places"
- Rex Reed (NY Observer)

"Ann Anello - A Major Talent. Bright, positive, and with a voice that is merely this side of marvelous. Go see and hear her. This lady is destined for stardom. You can say you knew her when."
- Judi McMahon (Nightlife, NYC)

"Her experience in the theatre is conveyed in every move, in every gesture, and in the manner in which she sells her songs."
- George Murphy (Democrat & Chronicle, Rochester, NY)

Ann was born in Brooklyn, New York of Italian descent and is a theatre degree graduate of Marymount Manhattan College. At the age of three, she captivated her first audience, her Brooklyn neighbors using a fire escape as her stage and would often vocalize in the local subway station in competition with the express train. "I wanted to have that kind of power in my voice." Following numerous appearances as a child on New York television shows, Ann landed a contract with Frank Sinatra's Reprise Records. This initiated a series of recordings which continued with MGM records and Kama-Sutra Productions leading to a few "chart singles."

"A Standout," according to The New Yorker, Ann Anello is one of the most sought after, creative, and respected singers, performers, and song-writers working in the entertainment industry today. Through her powerful, soulful, and dynamic voice, boundless energy and captivating personality, she has been dazzling audiences in nearly every corner of the world for more than three decades. She possesses an abundance of the one talent common to all great artists - the ability to electrify an audience. This places her solidly in the tradition of America's most popular entertainers.

Ann has appeared in Broadway herself at the Shubert Theatre in "An Evening of Music and Songs", with musical theatre luminaries Strouse & Adams, Kander & Ebb, and Sheldon Harnick. She won critical acclaim in Leonard Sillman's "The Best of New Faces" and at the famed "Lyrics and Lyricists" series at the 92nd Street Y, as well as in New York cabaret performances at the Raimbow Room, the King Cole Room at the St. Regis, The Ballroom, and Alice Tully Hall.

Countless other show business names have been imporeses with Ann's extraordinary talent. The list of celebrities she has performed with reads like a "Who's Who of American entertainment and includes Johnny Carson, Sammy Davis, Jr., Bob Hope, Tony Bennett, Andy Garcia, Robert Klein, Sammy Cahn, Brett Butler, Carly Simon, Cary Grant, Frankie Valli, Lloyd Price, Oscar Peterson, Pat Cooper, and Phyllis Diller, among many others. She co-starred with Jackie Mason in the film "The Stoolie" and also wrote the theme song.

Around the Country and the World. . .

Ann has also graced the stages at a number of regional theatres and concert halls across the nation including the John Drew Theatre in East Hampton, Long Island; Kleinman's Music Hall with the Buffalo Philharmonic Orchestra; The Dome Arena with the Rochester Philharmonic Orchestra; the Cleveland Institute of Music; Detroit's Ford Auditorium; the Saenger Performing Arts Center in New Orleans; The Coral Springs Center for the Arts in South Florida; and New Jersey's Garden State Arts Center. Notable resort and club appearances include The Hilton Hotel in Atlantic City, The Concord, the Wyndham Aruba Beach Resort, the Curacao Hilton, the El San Juan Hotel in Puerto Rico, and Studio I in Los Angeles. In addition, she has appeared in concert in Japan, Australia, and throughout Europe. Her phenomenal voice and extraordinary ability to astound an audience has taken her on some of the finest cruise ships in the world, including Cunard Lines' QE2, Crystal Cruises' Crystal Harmony, and Costa Cruise Lines.

A Major Talent in Great Demand. . .

Most recently, Ann was invited to perform with Carol Burnett at the Encompass New Opera Theatre's tribute to legendary composer Charles Strouse at the famed National Arts Club in New York, where she sang "Welcome to the Theater", as well as a special parody of "Tomorrow", written by Martin Charmin from their Tony award-winning Broadway musical Annie. As a songwriter, Ann is in much demand for broadcasts across television and has written theme songs and background music for CBS's "Guiding Light", ABC's "One Life to Life", NBC's "Another World", and the CBS world premier movie "Indefensible". With longtime collaborator and jazz impresario Mitch Kerper, Ann also wrote and performed "America" for the Statue of Liberty Centennial Celebration, which aired on ABC.